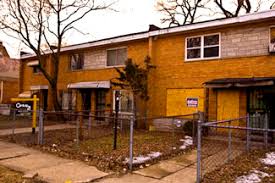 One of the rather easier methods to help us identify today with the children of Israel  is through the prophesied conditions of the black neighborhoods in America. Many of the inner-city black neighborhoods have conditions that were written to happen to them as a people ages ago. Europeans are the ones who handed the King James Bible to the world, and were the major slave holders and owners. Also involved in the slave trade and selling process were the “Jewish” people and the Arabs. If they are the dictators of the Bible, they are pretty good at orchestrating everything written to happen to Black people, not just in America, but all around the world.

Some radical black extremist groups, and pan Afrikan groups consider the European as “the devil” or the evil one. This is because of their (white man) cruelty to black people all around the globe. They have quite a bit of power if we are to believe the white man is behind the global captivity (both mental and physically) of black peoples. One of the conditions prophesied to happen to the community of the black American, also known as the children of Israel, was to have the father removed from the household. We do see this today happen in great number and in multiple ways.

Another condition was having a mother who has absolutely no love or regard or respect for her husband, and also who barely shows any love for her own children. The Scriptures state that the most “tender” person of the black female and the most tender of the black male (this is to say the nicest of the children of Israel), will still perform evilly against their spouse and children. This goes on in mass amounts in the African American community. Also the Bible talks about the young man being wild bulls and full of anger. This is shown in our young men and violence in the streets.

Speaking of streets, the scriptures shows that black men will often find themselves on the corner of the streets. Young men happily find themselves on street corners either selling banned substances, hanging out, or doing other things that are not only not profitable to themselves and to their family and the community, but also dangerous for their very own lives. One other prophecy stated was that we would find the children of Israel hidden in prison holes. They would be piled up in prisons or correctional facilities because of their behavior. The children of Israel have a brotherly bond that was broken by the Creator, this means they fight amongst themselves and a big reason why is because of economic problems. Economic problems lead to poor communities, and if the leaders of the communities do not take charge and use wisdom to bring everyone together, we continue to live under the curses, with no small sanctuary to find comfort.

These things are all written in the pages of the Bible, but very few people actually read the Bible and historical literature, and even fewer believe of the few who have actually read the contents of truth. If you would like more information and detailed research on ancient Egyptian history and the children of Israel, get a copy of The Dark Side of Black History today! Sign up for discounts and bonus info, audios, and video at our website…Sign up today!