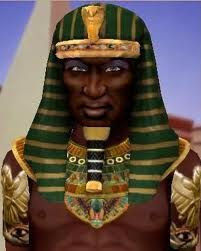 Did you know that there were at least eighteen Ethiopian rulers not mixed with other nation’s seed (pure black/brown) rulers of Ancient Egypt? YES, Ethiopians sat on ancient Egyptian thrones, and one of the more well known rulers was one named Piankhi (R. Krauss and D.A. Warburton, “Chronological Table for the Dynastic Period” in Erik Hornung, Rolf Krauss & David Warburton (editors), Ancient Egyptian Chronology (Handbook of Oriental Studies), Brill, 2006. p.494).

Piankhi, also translated as Piye, ruled from the city of Napata, located deep in Nubia, modern-day Sudan. Piankhi (flourished 8th century bc), king of Cush (or Kush, in the Sudan) from about 750 to about 719 bc. This guy invaded Egypt from the south and ended the minor kingdoms of the 23rd dynasty (c. 823–c. 732 bc) in Lower Egypt.

According to Egyptian tradition, his brother Shabaka founded the 25th dynasty, but Piye laid the foundations. The kingdom of Cush, of which Piye was ruler, emerged out of the Egyptianized population of the Sudan near Mount Barkal, between the third and fourth Nile cataracts.

Piankhi originally left his country in Central Africa and conquered all of Egypt all the way to the mouth of the Nile in 750 BC. Ethiopians are a black/brown people today as they have always been, and Piankhi would be considered a son of Ham in the lineages from the Bible.

Join our newsletter for inspiration, information, and hidden unique records on black history never shared in mainstream media. You’ll receive 8 audios that will paint a clear picture of black history and the black struggle (as a people)!