Chocolate Cut Off Hands… REALLY? Legend has it in ancient Belgium’s City of Antwerp, a giant named Druon Antigone once terrorized merchants who crossed the Scheldt River. He demanded toll fees he had not earned and would punish any disobedience by hacking off the right hands of his unfortunate victims.

Like all good stories, a hero – Silvius Brabo, rose above the tyranny and cut off the giant’s hand. To seal the deal, he threw that hand that wrought so much evil into the same river that once was the nerve centre of terrible Antigon’s rule. To this day, the city of Antwerp sells hand-shaped chocolates (Antwerpse Handjes) in celebration of Brabo’s heroics and the consequent death of the giant’s reign of terror.

Reality has it Belgian King – Leopold II  was a man of insatiable greed. He decided the land of the Congolese was going to be his and so it became. It was ironically named  The Congo Free State but the natives were not free. Between 1885 and 1905, 10 million Congolese were murdered at the hands of the Belgian monarch who never set foot in the Congo.

To account for every bullet used, the murdered’s right hands were hacked off and kept for stock-taking. Peter Forbath, a historian says, “The baskets of severed hands, set down at the feet of the European post commanders, became the symbol of the Congo Free State….

The collection of hands became an end in itself. Force Publique soldiers brought them to the stations in place of rubber; they even went out to harvest them instead of rubber… They became a sort of currency.” It was utterly stupid to think simple hands could account for cartridges as soldiers, way ahead of the curve, would make up for shortfalls by cutting hands of living blacks and presenting them to balance the books.

In their myth, the Belgians were the noble merchants terrorized by a psychopathic, self-imposed despot but in real life, they became the tyrannical giant. Belgium was Druon Antigone after all. What an ironic metaphor! What then do the Antwerpes Handjes represent?

Unlike Antigone who fell at the hands of Brabo, Belgium’s King Leopold II’s legacy survived largely untainted. Leopold’s hand was not cut off and thrown into the Congo River. His brutality is rarely ever berated with the same energy as that used against Hitler, for example. 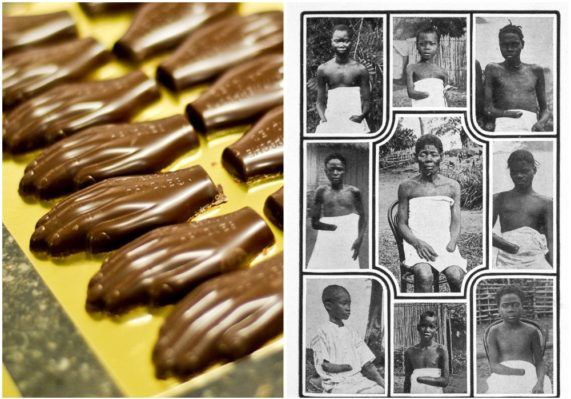